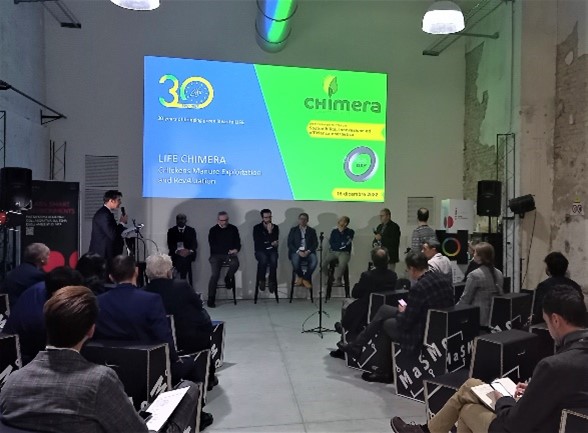 LIFE CHIMERA AT CLUSTER DAY, TOWARDS THE TRANSITION: SUSTAINABILITY AND ENERGY EFFICIENCY

The LIFE CHIMERA project has been one of the protagonist project at the Cluster Day organized on 15 December 2022, in Ancona (Italy) by the Marche Cluster Foundation, as part of the event "Sustainability, innovation and energy efficiency", during the Talk "Towards the transition: sustainability and efficiency energetic". Rosalino Usci Dissemination & Networking Manager of LIFE CHIMERA (in the photo during the presentation) highlighted how CHIMERA can constitute a new tool to facilitate the transition in the agricultural sector and in particular the poultry sector, under the banner of sustainability, proposing a new model inspired by the circular economy. During the Talk, Rosalino Usci also underlined how the creation of CHIMERA was possible thanks to the European LIFE program, recalling its thirtieth anniversary #LIFEis30. The Talk was attended, among others, by Massimo Fileni, Vice President of Fileni Spa, the third national player in the poultry sector and the first producer in Italy of white meat from organic farming and the first company to host the initial CHIMERA prototype, and Giovanni Battista Girolomoni, President Gino Girolomoni Coop. Agricultural. Find out more 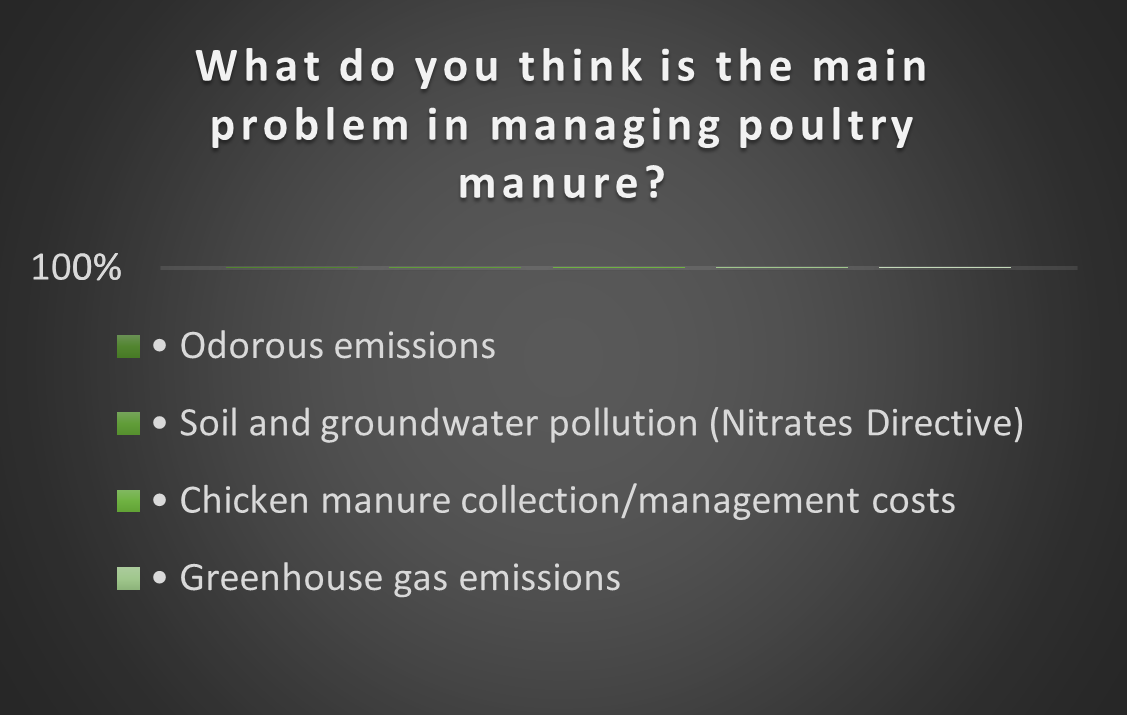 A Survey has been proposed for the poultry sector in relation to CHIMERA, to an audience of stakeholders, to investigate how the new technology created thanks to the European LIFE program can respond to needs and expectations of sector operators. The Survey was submitted during the LIFE CHIMERA Final Event on November 23, 2022, via webinar platform, interspersing the questions with the speakers' speeches. All the results were presented live during the event, with the involvement of the participants. The results highlighted how CHIMERA can constitute a new and useful solution as regards the management of chicken manure and its valorization. Four questions were presented: Q1: "What do you think is the main problem in chicken manure management?", Q2: "What is the most interesting aspect of a new technology for the valorization of chicken manure?", Q3: "In addition to the Nitrates Directive, what is the main deterrent for the direct use of chicken manure as a fertilizer?”, Q4: “Is fertilizer made from chicken manure a business opportunity for a farmer if it is solid or in all cases?”. Find out here the results of the Survey